PWC is partnering again with the San Luis Obispo International Film Festival to sponsor another wildlife film contest in 2019, calling for an original short, or animated film, as part of the Film Makers of Tomorrow contest.  Film submissions are due by the first week in January 2019. The film festival commences in mid-March. We’d love for an individual, group or classroom to be a part of it next year! https://slofilmfest.org/student-contest-rules/

In March of 2018, Pacific Wildlife Care partnered with the SLO International Film Festival for the first time to sponsor this new youth film award, ‘The Wild World We Love’, in the Young Filmmakers of Tomorrow category for students K-12. The winning entry, “How to Keep Wildlife Safe,” was submitted by Logan Gilbert, a 6th grader at Rosemont Ridge Middle School in West Linn, Oregon. His film can be viewed here. 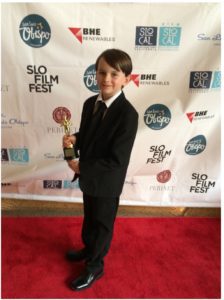 As the only local organization in San Luis Obispo County licensed to rehabilitate injured, orphaned and sick wildlife with the goal of releasing these healthy animals back into the wild, Pacific Wildlife Care plans to use Logan’s film, and likely any furture winning films in the education of other students about local wildlife.

A panel of jurists officially selected winning entries for ‘The Wild World We Love’ youth film award for 2018. The accepted films were shown at the Downtown Centre at 2:30 pm on Sunday, March 18, at the Filmmakers of Tomorrow showcase. The SLO International Film Festival awards, including ‘The Wild World We Love’ award of $100, were distributed at 6:00 pm at the Fremont Theatre on that same day.

Since Pacific Wildlife Care was not part of the selection process, we included guidelines for all prospective student entries to guard against filming which might have unintentionally been at cross purposes to our mission. For example, the filmmakers were urged not to get too close to any wildlife.  The guidelines for 2019 are unlikely to change significantly from 2018 and are available here.