In 2012, Los Angeles’ Griffith Park received a visit from an unexpected guest: a mountain lion. As P22’s story began to circulate, people began to learn about his journey to Hollywood and the impacts that led him to such an unlikely place. 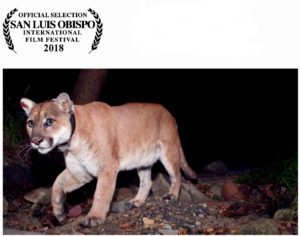 “The Cat That Changed America” was screened at the San Luis Obispo International Film Festival March 15, 17 and 18 at the Palm Theatre. The filmed was sponsored by San Luis Obispo County’s Pacific Wildlife Care (PWC) in a joint effort to spread awareness about wildlife rehabilitation and protection.

P22 was born in the Santa Monica Mountains and managed to cross the U.S. Route 101 and U.S. Route 405, eventually claiming Los Angeles’ Griffith Park as his new home. Although P22 has managed to find a compromise with his surroundings, he lives in eight square miles of land, a great contrast to the 200 square miles of living space required for a typical male mountain lion.

Biologist Miguel Ordeñana first discovered P22 while clicking through photos captured on camera traps, or motion-activated cameras typically used to photograph wildlife, for a Griffith Park wildlife study. Ordeñana quickly shared the news with his colleagues, such as National Parks Service’s lead biologist Jeff Sikich. Sikich and his team placed a GPS radio collar on P22 and have been following him for over four years, monitoring his activity and health.

During this time, National Geographic photographer Steve Winter was searching to photograph mountain lions in urban habitats. Winter soon came into contact with Sikich, and the process of photographing a high-quality picture of P22 began. The final product is what first exposed Tony Lee, the director and producer of “The Cat That Changed America,” to P22.

“I was inspired by P22’s story of perseverance and survival,” Lee said. “The problem facing wildlife in both America and the rest of the world is loss of habitat. The fact that he was able to take his environment and really thrive in the middle of one of the biggest cities in the U.S. is quite an achievement.”

In Griffith Park, P22 has experienced several challenges from human activity that have tested his livelihood. As he resides in a heavily urbanized environment that is not native to his kind, P22’s chances of finding a mate and producing offspring are low, according to California Director for the National Wildlife Federation Beth Pratt-Bergstrom. Additionally, he cannot be relocated by conservationists, as mountain lions are territorial creatures. As these animals claim large expanses of land in the wild, unknowingly placing a male into another male’s territory would result in a fight to the death.

A posed solution to the problem of limited habitat for, not just P22, but all wild animals in the urban area is to create a wildlife corridor. The proposed plan involves constructing an overpass in Liberty Canyon would connect habitats on both sides of the 101 Freeway. The California Department of Transportation is in support of this effort, as long as the organizations involved can raise $50 million by 2021. The “Save LA Cougars” campaign aims to do just that.

“The biggest thing that I love about this is, unlike some developments that are taking away green space, we’re adding back green space,” Pratt-Bergstrom said.

The issues facing wildlife from urban environments extend beyond the deathly barriers created by freeways. The ecosystem as a whole faces the effects of rodenticides, or rat poison, as animals consume the poison and are then eaten by other animals, poisoning the entire food chain. P22 himself suffered from mange, a skin disease, as a result of eating another poisoned animal. Sikich and his team spotted P22’s fall in health and provided him with the proper treatment. Other mountain lions, such as P34, have not been as fortunate in the face of rodenticide poisoning and have lost their lives.

“The overriding message is our human impacts have significant repercussions on our wildlife,” Pratt-Bergstrom said. “If we don’t start looking at solutions to those, big and small, wildlife isn’t going to be here.”

Connecting the Issue on a Local Level

PWC is the only licensed organization in SLO County that rehabilitates birds, reptiles and land mammals so they can be released back into their natural habitats. A majority of issues that the nonprofit witnesses involve “human-wildlife conflict,” according to president Kimberly Perez, many of which can be linked to rodenticides, or rat poison.

The dangers of rodenticides is discussed in the film by Joel and Kian Schulman of Poison Free Malibu. Poison Free Malibu is a nonprofit organization that aims to inform the public on the issue as well as to get the necessary regulations and legislation to tackle the problem in California. Poison Free Malibu has most recently partnered with PWC to bring reform to San Luis Obispo.

“Our main goal is to stop the poisoning of this wildlife, which means eliminating the rat poison that’s moving up the food chain that’s getting to them,” co-founder Joel Schulman said.
PCW and Poison Free Malibu are working towards changing rodenticide policies at a statewide level, and are offering solutions to pest problems, such as keeping trash contained and sealing entryways into homes. They have partnered together in attempt to reform the poison industry in San Luis Obispo.

“Here’s our experience — it may not be your experience, but we just want to educate and give you the tools to be responsible in the decisions you make,” PWC board member Kathleen Dillon said of their approach.

PWC offers an intern as well as a volunteer program for San Luis Obispo residents who would like to support their cause. They hope to educate more people about the treatment of wildlife in San Luis Obispo and the rest of the world.

“It’s just asking people to reach into their heart and support our environmental community and our wildlife community in whatever way that you can,” Dillon said. “Even if that is, ‘I’m not gonna do anything but slow down and pay attention.’ That’s okay too.”