Happy New Year to all our Supporters, Members, and Volunteers (who are often one and the same)!

We are delighted to be able to announce that with your help, our $75,000 Matching Funds Campaign was a success! Thank you so much! This means that in 2017 we will continue the important work we do in support of our mission and continue to pursue goals that will enrich our vision as an advocate for SLO County wildlife and wildlife issues.

We ended the year with 2,732 animals that were humanely treated and expertly cared for in 2016. For the first time in three years, we were not impacted by a Fall influx of starving and sick seabirds, thus our animal numbers were lower than in recent years, for which we were also thankful.

We did however have a difficult time early in the year with Surf Scoters, which were extremely adversely infected by parasitic (thorny-headed) worms. The 396 Surf Scoters which arrived early 2016, were but a continuation of the 75 infested Surf Scoters we received in December 2015. This winter (2016-2017) there has been thankfully no such massive parasitic infestation, but we do now routinely check incoming wildlife for parasites.

The photographs below show Dr. Shannon Riggs releasing a turkey vulture on December 29, 2016. After being hit by a car and treated for ten days, this was one of the last wildlife releases of the year– a perfect end to an otherwise prosperous year!

Thank you again for your hard work, generous financial support, and truly caring about the wildlife of San Luis Obispo County! We couldn’t do it without you! 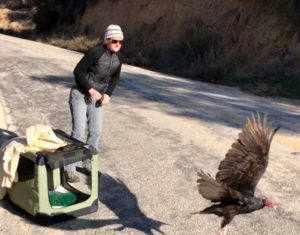 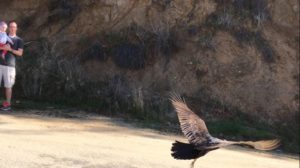 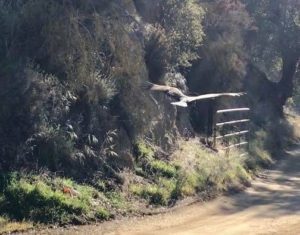