Morro Bay, CA, October 7, 2013—A matching fund has been established that will double all donations to Pacific Wildlife Care’s “Fund Our Vet” campaign.

A full-time on-site veterinarian, Dr. Shannon Riggs, was first hired at Pacific Wildlife Care (PWC) in January, 2013 as Director of Animal Care. Since then, survival rates have improved significantly, from 35% in January to 62% from March to October—well above the national average. The current funding effort aims at securing Riggs’ services through 2014.

Dr. Riggs oversees the work of skilled Senior Rehabilitators and 120 volunteers, optimizing efforts to provide prompt, expert care at PWC, whose mission is to treat and return to the natural habitat injured, orphaned, and pollution-damaged wildlife in San Luis Obispo County. The center has steadily expanded its capacity, volunteer base, and number of animals treated—taking in 2,336 animals in 2012.

Due to Riggs’ expertise, more animals are rehabilitated than could have been otherwise, such as a turkey vulture, recently released near Cal Poly, that was brought to the center with two broken wings—or a pelican that was admitted wrapped in fishing line and fish hooks, with a fish carcass in its esophagus and spines protruding from its pouch. Dr. Riggs reached down into its throat and pulled out a large rockfish. The pelican recovered and was released October 4.

Donations to the “Fund Our Vet” campaign will be matched, dollar for dollar, until January 15, 2014, although earlier donations will allow the center to better plan for the coming year.

For more about Pacific Wildlife Care, to make a donation to Fund Our Vet, or to learn about volunteer orientation, go to our website. 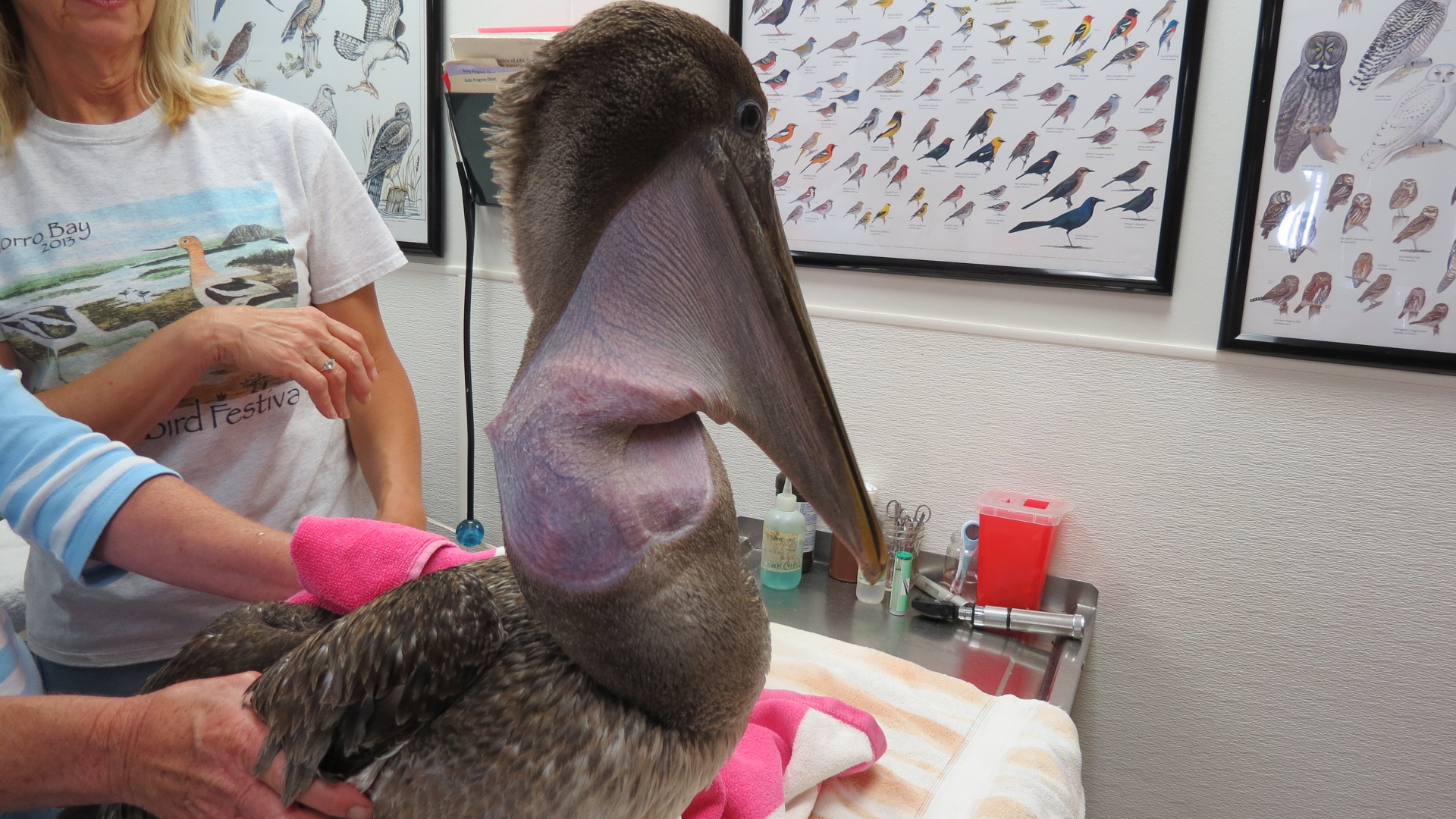 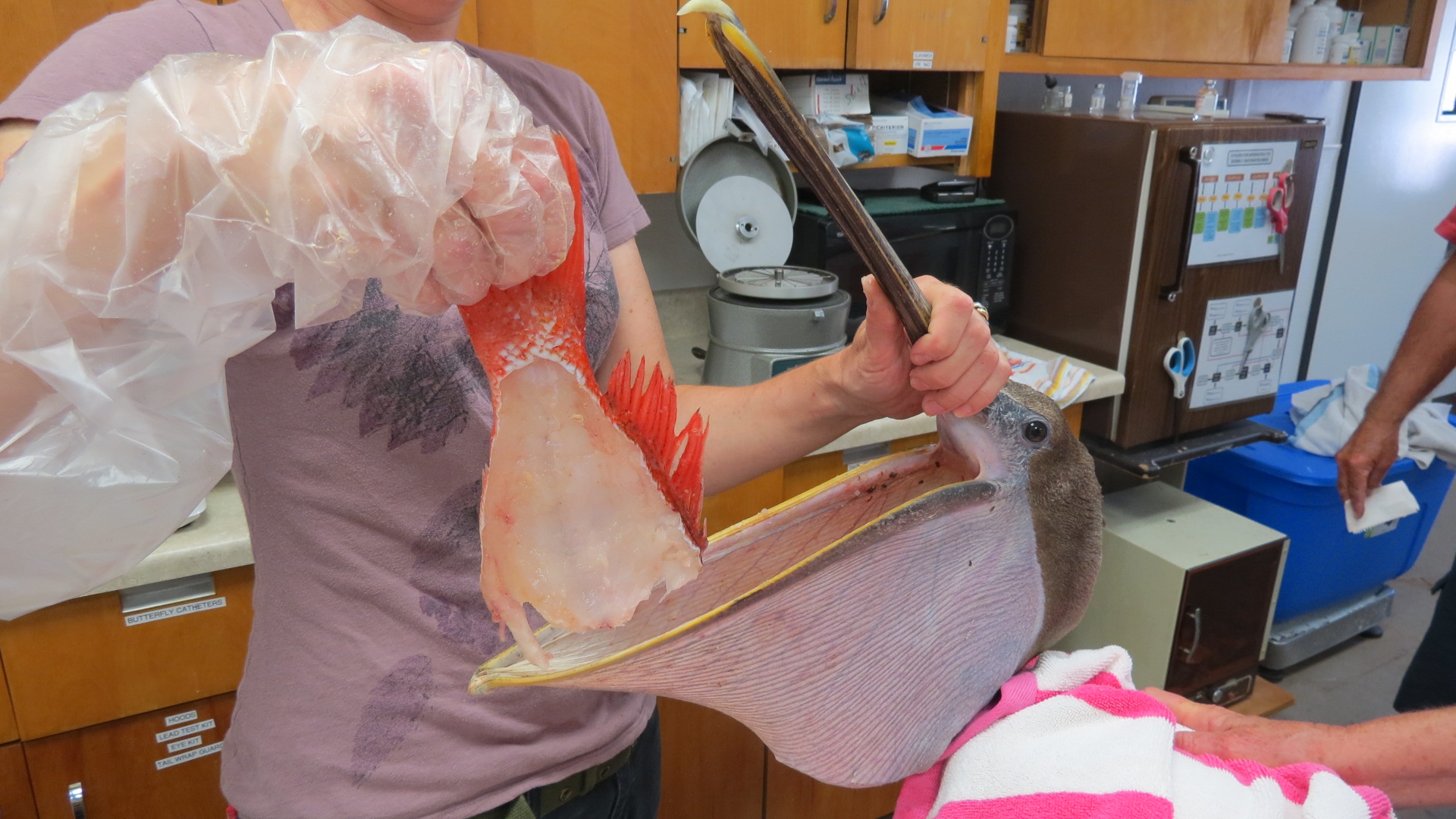 Raising kids is hard work! Happy Mother’s Day to all the human and wildlife moms out there. The best care a wild animal baby will get is with its parents. You can help ensure these wildlife moms get the chance to raise their young by keeping your cats indoors, not trimming trees until fall, and calling a licensed wildlife rehabber for any concerns with wildlife.

Pictured is an American Coot mom feeding her young.

It’s #WorldMigratoryBirdDay! Did you know that Arctic Terns have one of the longest migrations of any bird? Some will migrate an astounding 56,000 miles annually! Celebrate World Migratory Bird Day by following these tips about sustainable travel from the Arctic Tern. 🙂

Freedom Friday! An oldie but a goodie- a release from the end of last year. This juvenile Brown Pelican was found on the beach tangled in fishing line with hooks embedded in his wings and pouch. Fishing line and hooks can cause severe injuries, but this bird was lucky and made it to the wildlife clinic where he could be properly treated. Discarded fishing tackle is a hazard for many species of wildlife especially those that live near water and eat fish. Please pick up any hooks or line you find and dispose of it properly in a designated receptacle. Birds often raid regular trash cans so they are not a good option. If receptacles can’t be found, take it home to be cut up and discarded safely away from wildlife. If you find wildlife with line or hooks on them, call your local wildlife rehabilitation center. They will x-ray the animal to be sure there are no swallowed hooks in addition to treating injuries which may not be apparent without a careful examination. Thank you!

Spring is in full bloom and that means lots of wild animals are having babies. What does that mean for PWC?— lots of young wildlife are finding themselves in need of help. The most common cause of admissions during spring is cat attacks (34% of admissions), orphaned or kidnapped (22%), mowing/landscaping/tree trimming conflicts (10%), dog attacks (9%), vehicle collisions (5%), and window strikes (3%). Pictured are some of the animals we have received so far this season. We have included each animal’s story with its photo plus we added some tips for prevention of harm.
If you find that you have a few extra dollars in your pocket you'd like to share, your donation will go a long way to help us provide these animals with the medical treatment, surgery, and rehabilitative care they so desperately need to get back to their wild home. Without the support of the public, our doors would be closed. Any little bit helps. Thank you...and Happy Spring!

Shared with love, hope, and prayers!!!

Freedom Friday and a special wildlife release and story by one of our volunteers...

Hanging Out for the Winter at PWC

Say you’re a youngster born into a traveling circus family. Your troupe spends spring and summer in one area, then pulls up stakes to journey south for fall and winter. You’ve barely got a toehold in life when disaster strikes: you are seriously injured. Fortunately, some kindly folks at a local hospital take you in and treat your injuries. You recover. But by then winter has arrived, and your circus family left long ago for the south, not to return to the area until spring.

This is basically the case of three young migratory birds who overwintered at PWC, two Hooded Orioles and a Black-headed Grosbeak: a nestling, a fledgling, and a juvenile. One had been caught by a cat and another by a dog. Both had puncture wounds, and one required sutures. The third had fallen from the nest and had serious issues with feather condition.

One of the Orioles, found in Santa Barbara, was eventually brought to PWC’s Morro Bay clinic to be with the other, a “conspecific,” one of his own.

Although the Grosbeak wasn’t their conspecific, in the wildthe two species tend to “occupy the same areas and migration patterns,” Rehabilitation Technician Kelley Boland says. So in time, after healing from their injuries, all three became roommates for the winter in Aviary 2 because “birds always do better when they have other birds around, not people.” By early spring all were fully feathered, in good health, and flying like champs.

But these are migratory birds who depend on a flock for survival. They needed their “traveling circus troupe.”

On April 1, good news came of a flock of Hooded Orioles in Atascadero, back from Central America for the spring. And by “great coincidence,” Boland says, a few Black-headed Grosbeaks were seen nearby, in the next yard. Rescue-Transport Team members Kathy S. and Morgan N. were dispatched with the gratifying task of releasing them. They set down the carrier and opened it. Within seconds, the three birds returned to the wild, to the seasonal rhythm of the troupe.

I remember when they were posted. This is so hopeful and fulfilling💚! Thank you PWC!

I am the one who found the Black-headed Grosbeak at my apartment complex. I came out to my car to run errands and saw the 2 neighborhood cats (notorious for countless mice, bird and lizard fatalities), and sensed they were up to no good when suddenly I heard a bird chirp coming from the neighbors carport garage. I walked inside and didn't see anything, then I heard a single chirp again. I looked under the car in the carport and didn't see anything. I stood up and heard a chip one more time and thought, "where are you? let me find you" when I walked around to the front of the car, I saw it lying on its back on the floor, a little blood around the neck and several bent up feathers. I carefully and quickly scooped up the little bird and immediately put it into a transport carrier and zoomed off to the PWC center in Morro Bay. I checked in periodically on the birds progress and just saw last week that it had been released. Made my day, my whole week, my whole month! Thank you Pacific Wildlife Care for tending to the bird's need for 208 days until it was time to continue living with it's own!

Great story, Pam!! And thank you, Kathy and Morgan, for releasing them!!